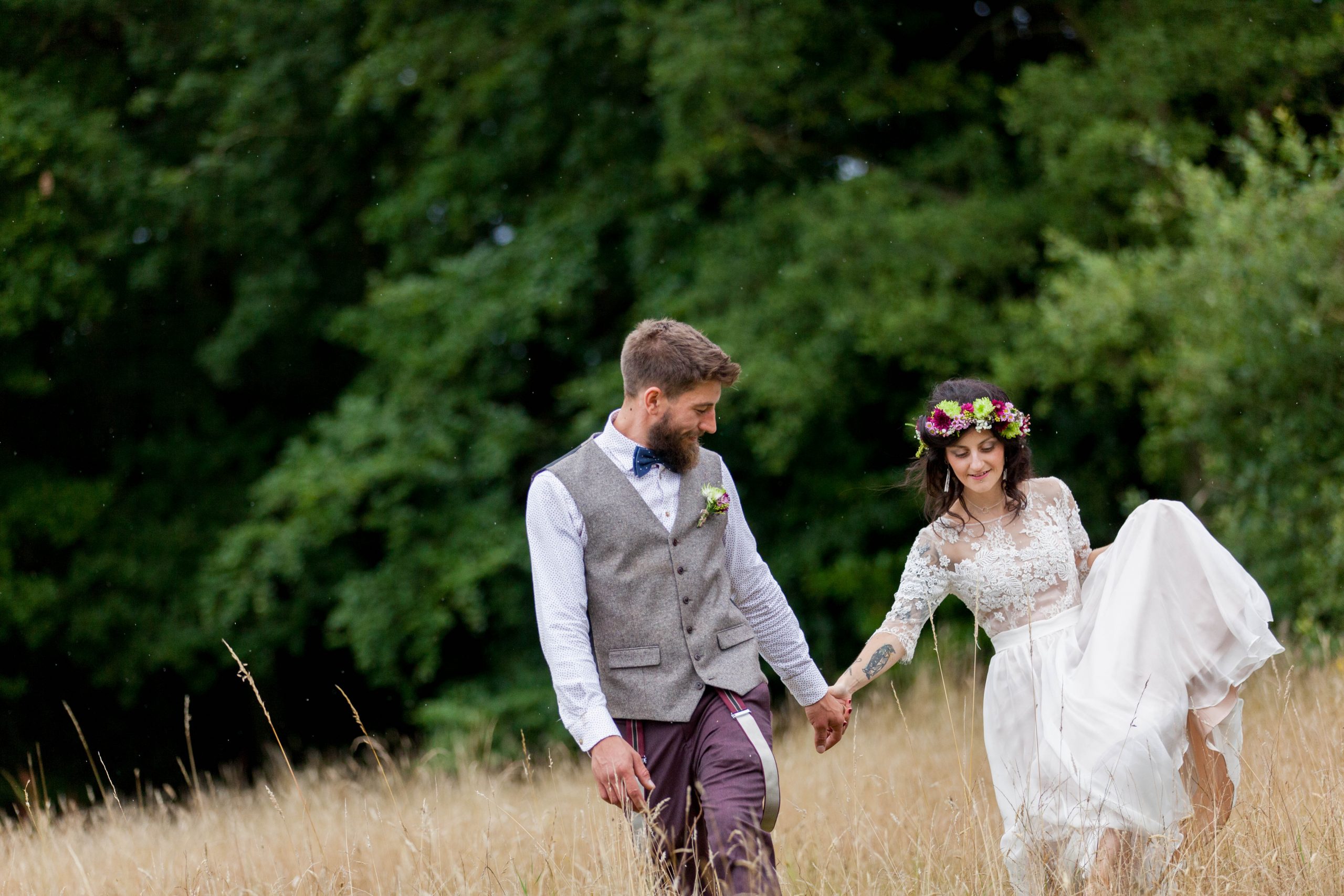 N&S are an excellent example of a couple who chose to prioritise natural photography at their wedding. These two has planned a quintessential woodland wedding during the peak of Birtish summer, of course summer had other ideas and the rain came down.

Great ideas, styling and some inspiration to be found in this amazing real wedding – Woodland weddings and venues are becoming increasingly popular year on year, with more couples choosing natural locations to host their celebrations. The industry is responding and more and more are popping up, they can be, however still few and far between with peak dates being highly competitive for couples. S&N chose one of my favourite venues and one that I am lucky enough to be recommended at, the unique Lila’s wood, which can be found on this link Woodland Weddings, it are based in Haste near Tring. Faye and the team at the venue take great care to ensure that every detail is taking care of for the couple, it really is quite a brilliant choice for a rustic wedding venue.

Lila’s Wood consists of about half a dozen covered structures of various form dotted around a small gloriously presented portion of woodland. Although there is plenty of characterful additions to the landscape to keep your eyes on the ground, I loved observing how guests just could not help but flit their eyes upwards to admire the trees (we are all secret Dendrophile’s really!). The guests can mill in any of the areas, with a bar provided in the form of a cleverly converted caravan, explore the trails around the wedding site or partake in the various games and activities about (swings, skittles, hoopla to name just a few!). One thing to bear in mind, is that Lila’s Wood, like the vast majority of venues of this nature, are unable to conduct legal ceremonies in the grounds and couples would need to make separate arrangements for the “legal bit”, don’t let this put you off though and you can look into having good friends perform your ceremony(as N&S have done here) or you could look into hiring a celebrant.

The morning of the wedding
As soon as I arrived with the bride, I was made to feel very welcome, smiles and cups of tea are always a welcome sight (obviously, I am hard at work too). The bridesmaids finalised the bouquets in the kitchen and the bride sat patiently getting her make up finalised. Music played and the interior of the house oozed style and good taste! I had a great time finding creative ways to capture detailed images, utilising N’s fabulous interiors to add character and make them more personal. The bridesmaids were all wearing gorgeous, matching floral dresses and all looked beautiful.
Her father arrived to collect her right on time and drove her to the venue himself in his pick up truck, because, honestly why ever not?

As mentioned earlier, they could not have a legal ceremony at the venue itself and they had already completed the legal portion of their marriage a few days earlier at a local registry office. They could have chosen to go with an officiant or celebrant, but instead, they decided to utilise some articulate friends to conduct the ‘real’ ceremony in front of their family and friends. Those that conducted the ceremony did a fantastic job, providing such personal and meaningful memories for the bride and groom, plenty of laughter and a few tears before the end. The couples lovely dog acted as partially reluctant ring bearer as well as a secondary role, recording the entire day courtesy of him wearing a GoPro on his back!

S&N were clear from early on in our booking process, that the key focus would be on natural images! However, like most couples, they still wanted a record of their immediate family and the most important people. Lila’s wood provides a lot of brilliant backdrop options and you stretch covered areas could be used without being visible to keep the guests (not me) dry enough whilst we completed them. The woodland also boasts a large treehouse which can be utilised for a few different things depending on what the couple might want to do with it, for me, it provided the perfect platform to take the main group photo nice and quickly and then get the confetti shot completed with impressive enthusiasm at the same time!

Well, we had all seen the weather report and we all knew what was coming. The couple were impressively unfazed, determined to have a good day and continue with as many of their plans as they could. Starting with reception canapés and drinks, served from a large, decorated trestle table with all kinds of options for guests to personalise their drinks however they might like.
Once everyone had been well refreshed, the couple led them to a large open area where they had arrange fun and games for their guests to participate in. Table tennis, badminton and tug-of-war were all available. The now slightly merry guests were undeterred by the threatening clouds and the soft ground, the ladies whipped off their heels and everyone got stuck straight in. The tug-of-war, I will confess was my favourite event to photograph, the expressions (and efforts!) on the guests faces says it all.

Couple Portraits
We split the couple portraits because of the inclement weather, doing a few on the way back to the woods… these guys wanted natural and it was a delight to work with them for their couple images. They laughed, they danced, they looked lovingly, all without an iota of ‘instruction’, just let them be beautiful together and captured as many of the magical moments as I could. Although the rain refused to let up, we did sneak out again a little after dark to get a few more creative portraits with them, see those a bit further on in the feature.

N&S utilised the largest tent at the venue, the tipi, which was covered in fairy lights and filled with trestle tables. The guests sat at the long tables and the conversation, food and drink began to flow freely around the room. The atmosphere was wonderful, the couple provided some personal touches, providing guests with their own little shots of homemade sloe-gin to help to keep them warm. As the temperature started to drop, the groomsmen placed large boxes of blankets about the place, so that chilly guests could help themselves.

The speeches were brilliant, full heckling throughout and plenty of glasses raised for plenty of good reasons. After their speeches finished, the couple went ahead and cut the gigantic ALL CHEESE cake, 5 tiers of various types of delicious cheese which also served as the evening buffet (with accompaniments of course!).

Dancing in the rain – The RIGHT attitude for a rainy wedding
Once the clouds opened, they seemed determined to stay that way! The rainfall was relentless and dripped slowly through the tree cover, the venue lit fires in fire-pits and guests good-naturedly huddled around them staying warm and continuing the merriment. The DJ had arrived by this point and some of the guests decided, if it was going to rain, then they would just have to get wet, they began to dance in the clearing and others started to get involved without much hesitation. The DJ was not about the miss a trick and blasted out Gene Kelly’s “Singing In The Rain” to the delight of the guests and more joined in the dancing. Some were holding their umbrellas, others has abandoned any consideration for the weather and I captured every moment I could whilst also appreciating a frankly glorious moment. If bad weather concerns you, I have more info on how to cope with rainy weddings and winter weddings.

The Evening
The venue provided more than enough covered areas for all of the celebrations to continue comfortably for the guests, with occasionally dashes to a different area, or to the bar. The atmosphere at this wedding just didn’t let up, all day, every where you looked, there were smiles, hugs, laughter, it really does make my job that bit easier. As the light started to fade, the guests began to naturally congregate under the large parachute covering, the fire and the bodies warmed it quickly and it became the make-shift dance floor for the remainder of the evening.

I snuck off with N&S for a last few shots once the dark began to creep in, we used the rather magical feel of the fairy-lit woodland and as expected, had a complete blast whilst we worked.

If you want to get in touch about your own wedding, you can do so here – Esmé